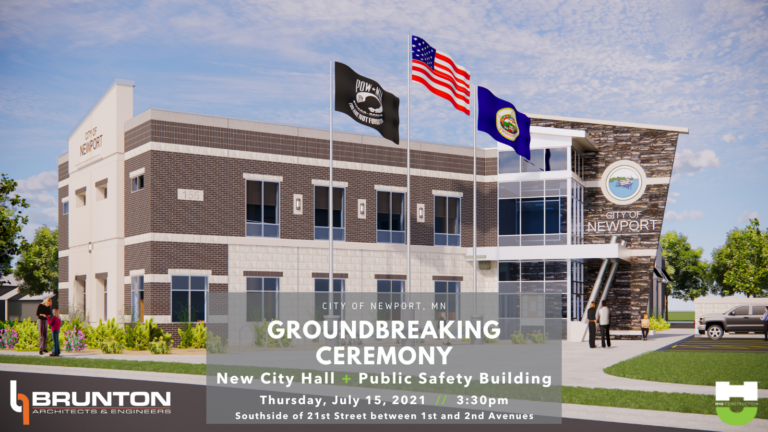 NEWPORT, MINNESOTA, July 7, 2021 — The media and public are invited to join the City of Newport and project team as they break ground on the construction of a new combined City Hall, Fire Hall and Law Enforcement Center located at 2060 1st Avenue, Newport, Minnesota 55055 (on the southside of 21st Street between 1st and 2nd Avenues). The groundbreaking ceremony will take place at the project site on Thursday, July 15 at 3:30pm.

The Newport City Council has been considering the possibility of a new City Hall and Fire Station since the 1990’s. The new facility will include several operational improvements while enhancing public safety and response times for the growing community. This site was chosen to be the best fit for emergency services to respond to fire and police calls compared to other locations along Glen Road, Hastings Avenue, and 7th Avenue.

Given the city’s growth, officials say the need is clear.

“We must invest in ourselves in order for others to invest in us,” commented Laurie Elliott, Mayor of Newport, MN. “A new building will maximize the City’s effectiveness of long-term financial planning. City Hall and both Fire Stations require several updates to protect the health and safety of firefighters and staff, come into ADA compliance, and resolve the maintenance costs associated with operating three buildings. The new building will also be energy efficient which keeps energy costs low and is environmentally friendly.”

The project team is led by the Brunton Architects and Engineers design team and H+U Construction who is serving as the Construction Manager. The new 26,000 square foot building is projected to be completed by spring 2022.

The City Council considered multiple options to include renovations to the current City Hall and Fire Stations. It was determined to be cost-prohibitive to renovate any of the City’s existing buildings compared to the cost of new construction for a building that will last for many decades.

Costs and Other Financial Information

Questions and/or Comments about the new building and groundbreaking ceremony can be directed to Newport City Hall by calling 651-459-5677.