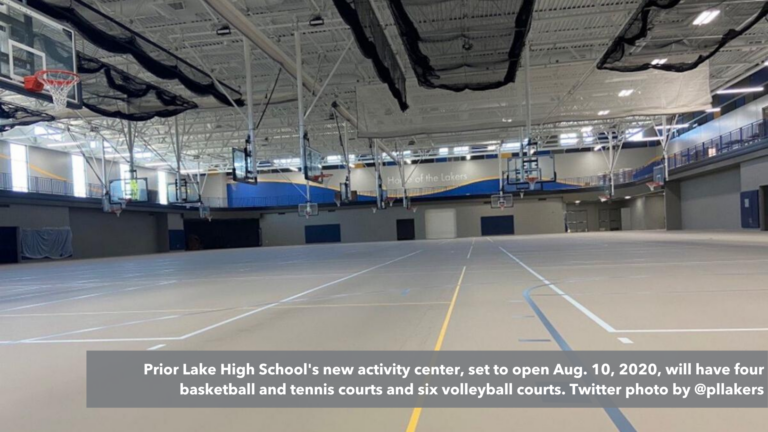 Featured In: Prior Lake American
By: Tom Schardin

H+U has been working with the Prior Lake-Savage Area School District to complete new construction, addition, and renovation projects for more than 20 years. In 2003 we were hired to build the Prior Lake High School (PLHS), and in 2013 we completed a 33,000/SF addition. H+U’s latest work on the ever-expanding PLHS includes several classroom wing expansions, new cafeteria and kitchen, and the new Laker’s activity center which was featured in the Prior Lake American newspaper article below:

The coronavirus pandemic has not slowed down construction of the new activity center at Prior Lake High School.

Athletic Director Russ Reetz said the new facility, which was part of a $109 million bond referendum in November 2017, is scheduled to open on time Aug. 10.

Included in the bond referendum was $46.8 million for additions to the high school, including the new activity center with four courts and a weight room.

“It has been a ton of work, but I feel really good about it,” Reetz said. “Our kids really need to get back to some structure, and our coaches are excited to return.”

Access includes pods of 10 members or less, and all users must follow the outdoor recreation guidelines maintained by the Minnesota Department of Natural Resources.

Reetz said his coaches are putting together comprehensive plans for a safe return for their respective sports.

“We are considering some youth camps for basketball and volleyball the week (the new activity center) opens,” Reetz said. “We do plan to follow the Minnesota Department of Health guidelines for gyms and health clubs. We are hoping by then that some restrictions will be lifted.”

The new activity center will benefit Prior Lake in more ways than one. It’s not just a facility for high school sports, but also an asset to the community.

Reetz said the facility can be used in multiple ways, including four basketball and tennis courts and six volleyball courts. There’s a four-lane walking track, four batting cages, two hitting nets and a mat hoist that will house cheerleading and wrestling mats.

“I believe the new space will be reserved most nights until 10 p.m. and from open to close on weekends,” Reetz said. “In terms of high school programming, this facility will be a game changer for every sport including activities like marching band and robotics.

“I’m most excited about bringing dance and cheer back to the high school,” Reetz added. “They’ve been practicing at both middle schools for a long time. We will also be able to get all levels of basketball practice done by 7 p.m.”

More intramural activities will also be available at the new facility. Reetz plans to add co-ed volleyball this fall and perhaps a hip-hop dance program, where participants would perform at halftime at basketball games.

There’s also potential to expand the current intramural basketball program and move school dances to the activity center along with larger community events.

“Our physical education classes will be the big winners,” Reetz said. “They have the space and the facilities to really help our kids develop a passion for fitness and lifetime sports.”