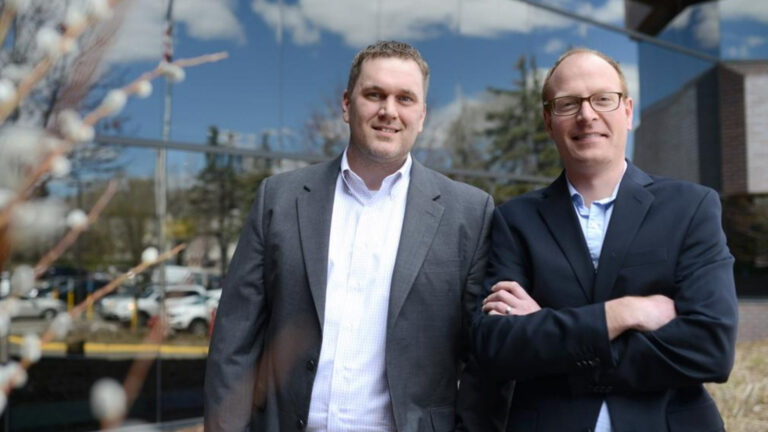 In their six years working for Wenck Construction Inc., Andy Hoffmann and Joe Uhlhorn often thought about leaving to start their own construction firm. So when Maple Plain-based parent company, Wenck Associates Inc., announced last October that it was considering selling the construction division, the two pounced on the opportunity.

In March, Hoffmann, formerly vice president of preconstruction, and Uhlhorn, a controller, acquired the division. Their new company, Hoffmann + Uhlhorn Construction, Inc. (H+U Construction), has 28 employees, but the partners have big plans for its future.

In addition to continuing to specialize in school –– the firm is doing a $40 million addition to Prior Lake High School –– it secured a contract with the Minneapolis Board of Parks and Recreation to construct the Water Works park project that will stretch across three acres of riverfront by the Mill City Museum in downtown Minneapolis.

The Business Journal recently talked with Hoffmann about the transition, the state of the industry and what projects the company has  planned for 2019. The interview was edited for length and clarity.

When did you two decide to purchase Wenck, and what drove that decision?

The idea came up several years ago, but it got legs in October last year when the idea was introduced by Wenck that they might be open to selling the business. Joe and I jumped right on it. We’d always thought it would be a better fit for us to separate and go off on our own ownership and that just came to fruition in the best way. [Joe and I] wanted to make more investments in construction, but we were part of the bigger Wenck Associates Inc. organization, which had different goals and strategies.

Besides the name, what other changes are in store?

We’re changing names, but aside from that we’re the same people, same process, same clients in the same sectors. I’ve told all our clients that if they notice a change, they should probably let me know.

What are your plans for the transition?

By the end of the year, we will be switching office locations, as we’re still in space leased by Wenck. We’re going to stay close to where we’re at in Golden Valley, either in Golden Valley or in St. Louis Park. We’re also bringing on new people. We just hired a marketing person and we’re hiring for a development position. And then we’re rebranding right now, with the new name and a new logo, and that will be completed before the end of the summer.

What are some of the biggest challenges facing your industry right now?

The elephant in the room is workforce availability. That kind of tails into the stability of pricing right now. We’ve seen steel costs and raw materials go up 25 percent or so in the past year and a half. When you combine that with the workforce shortage, what it all comes down to is an escalation of costs. The materials costs you pretty much can’t do anything about. But when it comes to labor, bidding [for contractors] in December, January and February for spring projects is key because right around March every year the labor is pretty secured. Just really trying to bid as early as possible helps.