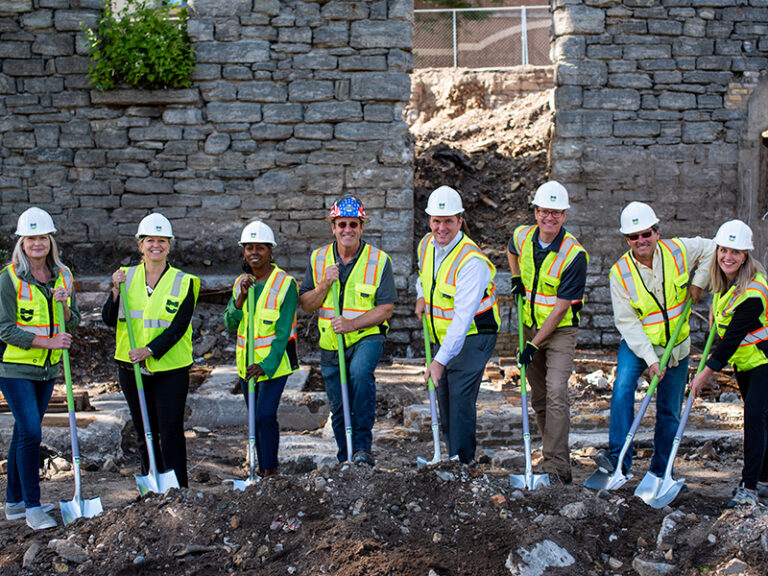 A crumbling limestone wall is all that remains of the Columbia Flour Mill, one of several mills along the Mississippi River that anchored a burgeoning Minneapolis more than a century ago. Yet life along the riverfront can be traced to centuries before that, when American Indian tribes lived there before the arrival of white settlers.

Now, an overhaul of the riverfront will recognize the history of both the city’s milling district and its indigenous people. Crews unearth riverfront history as part of Water Works project in Mpls.

Posing with golden shovels in front of the recently unearthed mill ruins, city officials Wednesday celebrated the groundbreaking of Water Works, a $20 million redevelopment just west of the Stone Arch Bridge. The long-awaited project will bring new public features to the riverfront, including a two-story pavilion, a plaza and a restaurant serving native dishes.

“We are at the birthplace of our city,” Mayor Jacob Frey said during the ceremony. “We’re in a sacred spot for our indigenous community, and it’s a spot that should be highlighted.” The construction underway is the first phase of a larger $30 million project that is primarily being funded by private donors, according to the Minneapolis Parks Foundation. The pavilion and plaza are expected to open in the fall of 2020, followed by the restaurant in the spring.

The pavilion and restaurant will be embedded into the mill ruins and use the space formerly occupied by Fuji-Ya, a Japanese restaurant, that has sat empty since 1991. The area next to the restaurant, which used to be a parking lot, will become an upper-level plaza. Construction crews began working in July and are almost finished excavating what remains of three mills, including the Columbia Flour Mill. Using power from the river, they turned grain into flour, cut logs into lumber and produced animal feed that was then shipped across the country.

The stone wall ruins of the Columbia mill are the most prominent. “There was always a lot of interest into what that wall peeking out was,” said Kate Lamers, the project manager for the Minneapolis Park and Recreation Board. The side facing the riverfront will be left exposed as part of the plaza. Diggers also unearthed a section of rusty railroad tracks that ran along the river, where trains would pull up in front of the mills to weigh flour, Lamers said. Those tracks will be buried again, she said, because “obviously we can’t have pieces of metal sticking up.”

Barrel-vaulted ceilings and redbrick walls make up the inside of the former Fuji-Ya, which will be reborn as a restaurant run by The Sioux Chef tentatively called “Owamni: An Indigenous Kitchen.” The company specializes in native food, including bison and wild rice, and founder Sean Sherman was honored with a James Beard leadership award earlier this year. Dana Thompson, co-founder of The Sioux Chef, said the Water Works project will honor the indigenous heritage of the region. “This place is a site of deep spirituality, a sacred site of peace and well-being for Dakota and Anishinaabe people,” she said. “The awareness will help fight a lot of the stigma in indigenous communities.”

The Park Board and Parks Foundation are touting Water Works as one of several new projects connecting residents to the Mississippi River.

The brewing redevelopment of the Upper Harbor Terminal in north Minneapolis, which Frey has called his top capital project, would bring a large concert venue, housing, parks and more to a 48-acre industrial site. Parks officials also recently announced the creation of a river overlook at the end of 26th Avenue on the North Side. City officials are also looking at what to do with the Upper St. Anthony Falls Lock and Dam next to the river’s falls. One plan would turn the lock-and-dam into a public space with a visitor center, event space and underground parking; another plan could generate hydroelectric power at the site. The U.S. Army Corps of Engineers held two meetings on the topic earlier this month.

Construction on the Water Works project will continue through the winter. The second phase of construction is expected to begin in 2021.