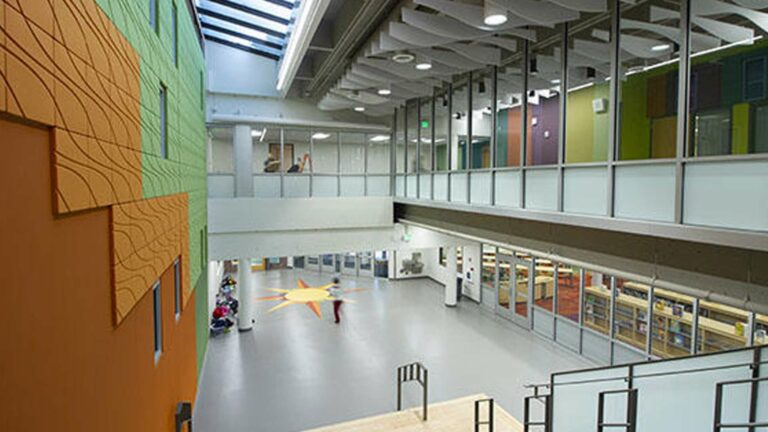 Education has changed since 1923. But other than 1973 and 1999 additions, Adams Spanish Immersion School hadn’t. So a complete renovation and addition to the St. Paul school was completed in 2018. The renovation, especially a wide stair in the entrance, brought light and space into the building and added 31,000 square feet. “Adams had the smallest amount of learning space per student anywhere in the district,” says Thomas Parent, facilities director for Saint Paul Public Schools. Improvements included a new kitchen, cafeteria, and classrooms, as well as an outdoor garden area and larger playground.

The project, part of a district-wide plan to improve all of its 72 buildings in 10 years, added spaces for individual students, small groups, and even community members. The new playground incorporated non-directional play. “We focus on inclusivity in our play,” Parent says.

With the school’s more than 600 kids away during the summer months, H+U Construction and its 26 prime contractors drove as hard as they could during that time. “We called those summer slams,” says Andy Hoffmann, H+U’s President.

But when students came back to school, H+U had to handle the logistics of construction with students in the building. That meant building the addition first, to make that space available for students, then shifting students into new spaces as they were renovated.

“We planned for [the phasing] for eight to 10 months before we broke ground,” Hoffmann says.
That phasing could have been thrown off by unforeseen problems like the asbestos-contaminated soil or the tight spaces where mechanical and electrical were housed. But similar problems had been foreseen, like the high-peat soil that had to be removed to prevent settling and the clay block walls that had to be removed rather than repaired.

Despite the issues, the project came in on time. “There’s not a lot of wiggle room in school construction, because kids come back in the fall, and their parents bring them,” Hoffmann says. “So it’s got to be right.”