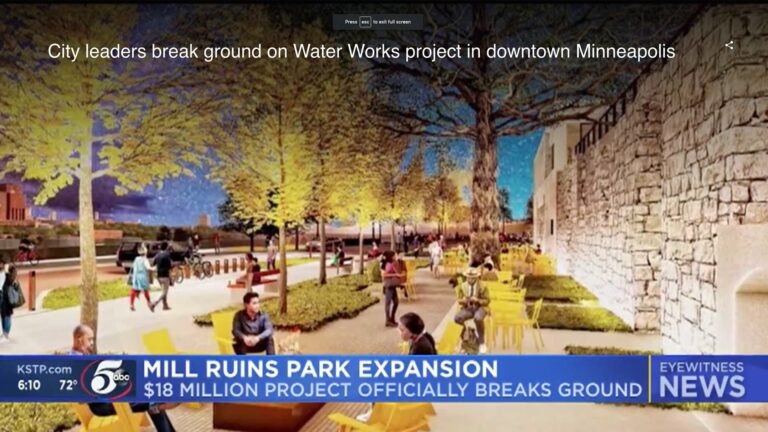 Even though construction has been underway for a month, city leaders officially broke ground Wednesday on the expansion of Mill Ruins Park adjacent to downtown Minneapolis.

The Water Works project, as it’s being called, will transform the riverfront near the Stone Arch Bridge to include a new pavilion, restaurant and plaza.

Already, in the short time construction on Mill Ruins Park has been underway, crews have uncovered tracks railroad cars used to haul flour from the city’s old mills.

“When you can look a quarter-mile in that direction and a quarter-mile upstream and see maybe five people, you know you’ve got work to do,” said Frey.

The work to change that starts with a planned 7,800 square-foot pavilion complete with a new restaurant, public lounge and open plaza.

Crews will also build a trail, providing a direct link between Water Works and downtown Minneapolis.

“It’s going to be teeming with people,” said Minneapolis Park and Recreation Board Commissioner Jono Cowgill. “It’s no longer going to be a throughway for cars, but it’s going to be a place for all people, where all modes can stop and gather and celebrate the incredible falls.”

If all goes according to plan, the Water Works project will be completed by the fall of 2020 with the restaurant set to open the following spring.

The pavilion will be home to the first restaurant from Sean Sherman and Dana Thompson, who together make up The Sioux Chef.

Sherman and Thompson said they plan to serve nutritious, healthy and indigenous foods that are relevant to the region at the restaurant, tentatively called Owamni: An Indigenous Kitchen.