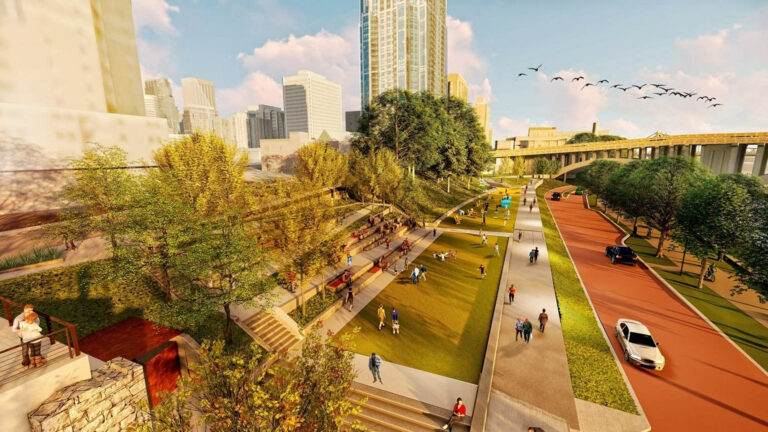 Some of Minneapolis’s oldest grain mills will get a new lease on life as construction kicks off on a riverside park pavilion, the latest step in the city’s ongoing riverfront development.

The $30 million, 5-acre Water Works project will sit just upstream from the Stone Arch Bridge along the Mississippi River to Third Avenue. Plans include a two-story pavilion with a restaurant, public lounge and meeting room.

The restaurant will be the first for Sean Sherman, the so-called “Sioux Chef,” who has won a James Beard award for his advocacy and revival of Native American cuisine. It’s scheduled to open in the spring of 2021.

Sherman noted the site, formerly the site of the Occidental, Columbia and Bassett mills on the riverfront, has a long historical link to food. It was most recently the site of a former riverfront Fuji Ya restaurant, vacant since 1991.

He said it has an even more ancient link to Native American culture at the Mississippi River’s only waterfall.

“It’s just something, I think to have the indigeneous perspective on this waterfront, to have some of the histories that go much much deeper than the city … right here in front of a sacred Dakota area,” Sherman said during a groundbreaking ceremony Wednesday.

Some of the historic mill ruins are still on the site, including basement walls preserved below 1st Street S. Some of the features of the ruins, like thick limestone walls and handbuilt brick barrel vault ceilings will be preserved. Others, including a scale pit and rusty rails used to weigh train cars, have deteriorated too much and will be reburied under the new construction.

The Water Works development will add some of the same amenities the city offers at its landmark lake pavilions, said Al Bangoura, superintendent of the Minneapolis Park and Recreation Board.

“If you look across any other city across the U.S., the riverfront is the critical piece that sometimes gets forgotten because you have a lot of industrial corridors along the river,” Bangoura said. “But if you start to look at Minneapolis and how its changing, and how it’s becoming more residential, people demand and want this now.”

The city’s fast-growing North Loop neighborhood and its ne emphasis on the river, including the Great Northern Greenway

Riverlink and the Upper Harbor redevelopment further upstream make the Water Works an ideal addition to the city’s riverfront park amenities, he added.

Other amenities will include play areas, a step-like outdoor gathering place, water features like a wading pool, and a river overlook. Construction is expected to wrap up in 2023.

Private philanthropy, including the General Mills Foundation, Bank of America, the Pohlad Family Foundation and the Richard M. Schulze Family Foundation are contributing about $18 million, a little more than half of the project’s expected final cost.